The 3 Collection types are "Collect Gold", "Collect Honor" and "Collect Runes". Players can receive Gold, Honor and Runes in a short amount of time. "Collect All" to get all the unlocked items at the same time.

TIP: tapping the "Collect All" button allows you to collect from all three sources at a cheaper diamond rate. (Great for collecting event requirements) 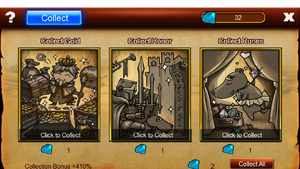 Transmute - Players can perform Alchemy rewarding currency, with attempts regenerating once every half an hour. 3 identical shards grant you bonus results including hero stones and extra currency. If you don't like the shards generated. use Refresh to regenerate new Shards. You have one free Refresh chance every hour or you can spend Diamonds to Refresh. A refresh seems to generate only equal or better value shards, so if you are nowhere near the cap, multiple refreshes on the same set can work your way to a set of 3 good and identical shards. Every Recruit grants you 20% bonus Gold result. You will get one Alchemy opportunity every 30 minutes.

You can transmute every half an hour. Every level in the Lab increases gold bonus by 0.4%

Note: Alchemy is not limited to 24 attempts per day, but the cap stop at 24.  After you have used your full 24 attempts check back every 30 minutes for more attempts.  There is no limitation on attempts that may be performed per day.

Tip: Transmuting will have a chance of gaining contribution points towards your guild.

Challenge - If your friend is Recruited, you can Absolve him/her of duties. But your level cannot be over 10 levels higher than his/her boss. Your friend will become Available after being successfully Absolved. Successful challenges will earn you Prestige.

You can also use Diamonds to purchase more recruitment slots but you'll need to have the required VIP level to do so.

Actions - Every Recruit will work for you for 24 hours. During that time, Gold will be generated non stop. The Recruit being Released,  Absolved or Passing the time period(24 hours) are the 3 ways to claim the gold your Recruit generated.

Operation - allows you to Work and Guard the recruit.

Magic House is where all your Technologies are, You can upgrade Tech in the Magic House and raise your Heroe's attributes.

You need Honor points to upgrade Tech. Honor points can be collected from Castle and Dungeons. Daily honor pack also gets you some honor.

What Exactly does some Techs Do?

Below are the list of Technologies that most player are confused about what they do. 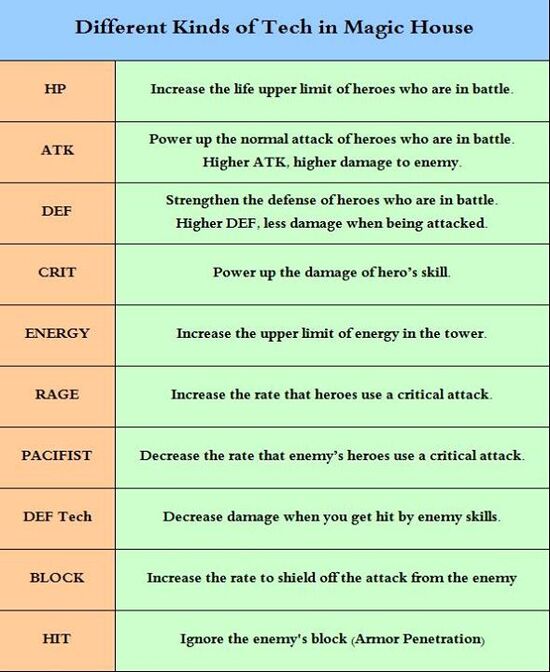 Level 1 of each of the guild technologies costs 50 honor and zero accu. contibution/guild metals.

There seem to be no real certainty if guild technologies might only apply to guild activities and not to things like normal tower, world dungeon or event tower or if they do apply there too. (the guild page has some discussion on it in its comments. Game Masters don't exactly make the discussion more clear with comments like "Dear, guild gold tech is only bonus for collection in castle. Exp tech is bonus for dungeon and tower. And to be frankly, the bonus of every level is not very high. So it is not apparent to see the bonus." [1] which is very unlikely to be 100% correct...)

Tip: Collecting in castle has a chance of gaining contribution points towards your guild.

Retrieved from "https://pocket-knights.fandom.com/wiki/Castle?oldid=20735"
Community content is available under CC-BY-SA unless otherwise noted.